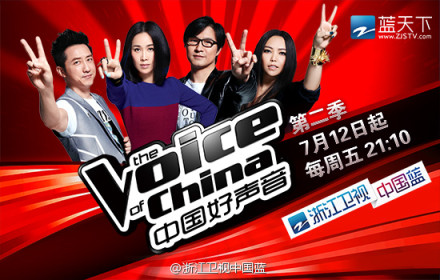 Too popular for their own good: China restricts TV singing competitions

Why the government doesn’t like singing shows – even though ratings are so high.

Last year the popular TV show The voice of China dominated social media chatter, leaving the case of Bo Xilai, a political scandal of epic proportions, to become the number one trending topic on Weibo for weeks. Seeing how popular a national reality TV show can be, major Chinese provincial TV stations have started competing to attract their own viewers, perhaps hoping their shows will be next. Voice of China. outraged The voice of China, which will broadcast its second season, and Super Boy, Once the most popular talent show broadcast by Hunan Television, more than 20 reality shows were slated to launch this year, some of which would air simultaneously, fiercely vying for audiences.

But their hopes and best efforts may not stand a chance to bear fruit.

On July 24, the State Administration of Press, Publishing, Radio, Film and Television (SAPPRFT, formerly SARFT) announcement that it would implement “regulations and controls” on national singing competition broadcasts in order to “avoid the monotony of television programs, provide more options to the public, and satisfy the various demands of people for music. television broadcasts â€.

In the eyes of SAPPRFT, all television shows must “Avoid extravagance, luxury, sensationalism and flashy programming, as well as formats that cause too much excitement.” In order to achieve these objectives, as of July 24, no satellite television network is authorized to produce new singing competition programs; programs whose filming has ended but which have not yet been launched must be withdrawn until the end of the summer vacation; and programs already broadcast should adjust their programming to avoid conflict with other programs.

One day after the announcement of this regulation, the Guangming Daily, another Communist Party newspaper in China, published an editorial criticizing the quality of national reality shows and describing how badly they needed reform.

While some have adopted SAPPRFT’s latest initiative – Weibo user @Chi-Chi wrote that it was “great that I don’t have to put up with endless discussions about singing competitions anymore” – more Chinese people expressed disappointment, even anger, at the rules. Although SAPPRFT attributed its decision to “considering comments from the general public,” most people rejected this attempt to claim representation. As user @WANG- åŒå¿— stress, “I am not ‘the general public’ nor ‘the masses of people’, SAPPRFT better not try to ‘represent’ me.”

Some seemed to be fed up with the endless regulations of SAPPRFT. As a Weibo user @ æ˜Ÿ é€¸ æ–‡åŒ– é™ˆæ–°å³° remark, “A positive word for [the new policy] is “regulation”, but in essence it is monopoly and oppression. Lack of competitiveness, [Chinese Central Television] may take advantage of administrative measures to gain an advantage, but does this victory have any value? “

Others hoped that television would continue as before despite the new regulations. User @?? offered his reasoning: â€œIf the audience doesn’t like the show, the ratings will go down; if the ratings for a certain type of show go down, the TV channels in turn will cut similar programs or adjust the shows to attract more viewers. market and the audiences themselves.

The market, as reflected in the notes, seems to host such talent shows. When The voice of China premiered for Season 2 on July 12, it drew 5.55 million Weibo users in discussions on the show and hashtag #The voice of China remained the number one trending topic on Weibo throughout the three-hour show. Meanwhile, 3 million social media users also tweeted about super boy while he was on the air. Time will tell what effect, if any, the new SAPPRFT regulations will have on Chinese viewers’ love for vocal artists chasing their dreams.