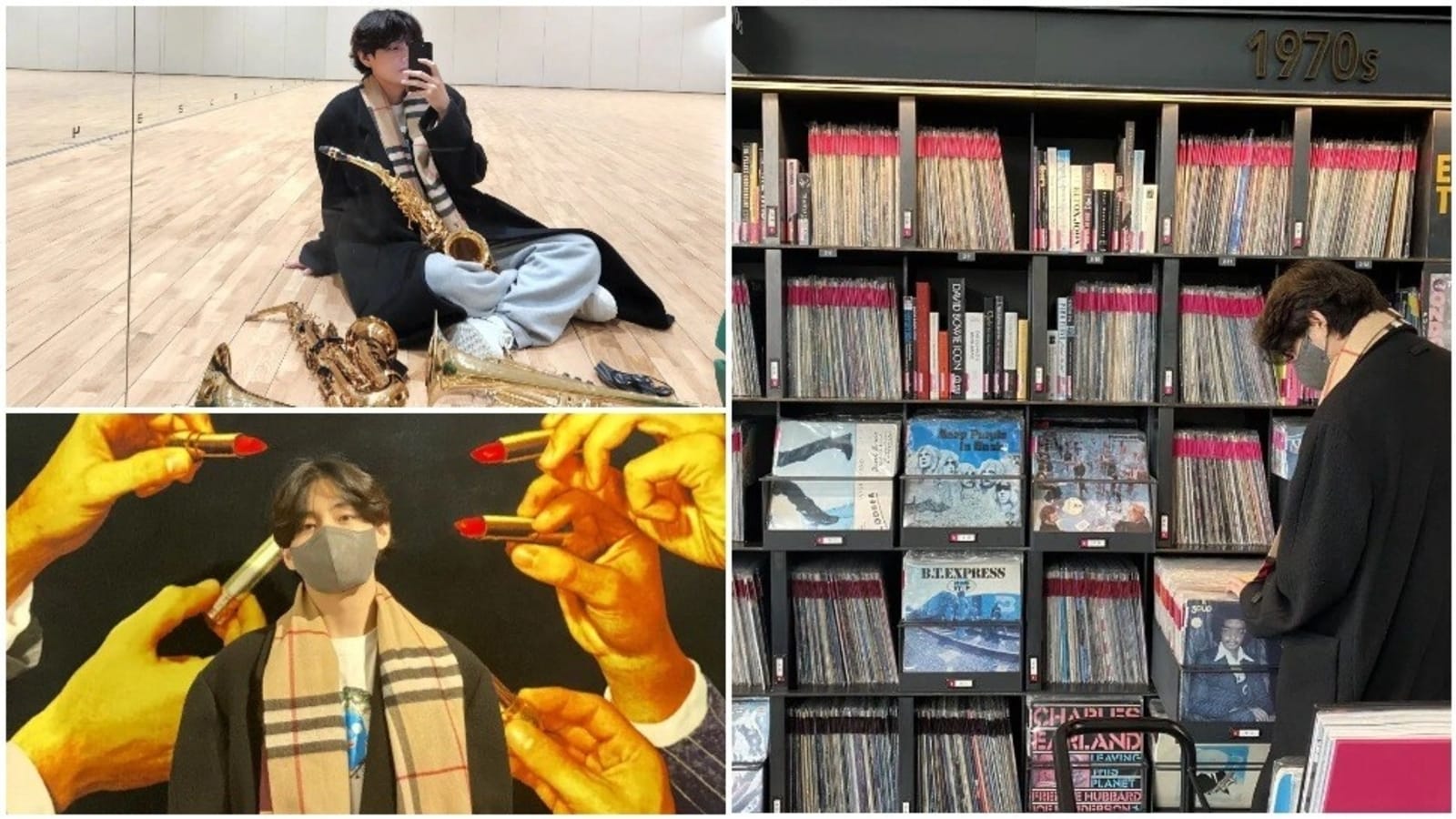 BTS’ V Shares Photos As He Flips Through 1970s Music Albums And Poses With Saxophones, Fans Say, ‘Boyfriend Vibes Are So High’

On Saturday, BTS member V shared photos giving a glimpse of his day with his friend as he browsed music records from the 1970s and 1960s and posed for photos. Taking to Instagram, V shared his first post on the platform following his recovery from Covid-19. In the first photo, an illuminated neon sign read “Listen.” It was followed by a photo of V posing with his friend as they sat smiling on a stage with several instruments including a drum. (Also Read | BTS announces four April concerts in Las Vegas, taking place right after the Grammys: check dates, location and other details)

In the next few photos, BTS’ V is seen browsing through recordings, stacked from floor to ceiling. In one of the photos, V is seen looking at his phone while sipping a drink, next to a bicycle. V also posed in front of artwork on a wall and shared a mirror selfie as he sat on the floor surrounded by trumpets and saxophones.

In the last slide, V shared the photo of his drink and wrote, “Eat delicious 🙂 but beautiful,” as translated by @BTStranslation_. Sharing the images, V added a face showing spiral eyes and dazed emoji. For his outing, V opted for a white t-shirt, gray pants, a black coat and a scarf. He also wore a face mask.

BTS fandom ARMY shared their photos on Twitter. One person tweeted, “He’s such a boyfriend.” One fan wrote, “And this man claimed that his photos don’t have a boyfriend vibe? Taehyung, you are literally the embodiment of that, seriously looking at these photos, I feel comfortable.”

“I have no words to say because he is so handsome. I really love this man. He looks absolutely perfect,” another person said. A fan also tweeted, “POV: – your boyfriend Tae went to a jazz store to buy some albums…you both enjoyed the quality time…while you bought him a drink, you couldn’t help but click on a picture of him (candid)…and damn you just thought how much you fell in love with this man.”

A fan said, “Taehyung, your hands look heavy. Let me hold them for you.” Another fan tweeted, “The buddies vibe is so strong in these pics.” “I have no other words to say other than he looks like a dream, so perfect so cuddly so wlwkowwb,” another person said.

Earlier this week, BTS was named IFPI’s 2021 Global Artist of the Year, making them the first act to win the award two years in a row. Their Japanese album BTS, THE BEST topped the Oricon year-end album chart in Japan at the end of 2021, the first for a non-domestic act in 37 years, Reuters reported citing IFPI.

BTS will hold their Permission to Dance on Stage concerts in Las Vegas and Seoul. While they will perform in the United States in April, South Korean fans will enjoy their show in Seoul in March. BTS was also nominated for Best Pop Duo/Group Performance at this year’s Grammy Awards for their song Butter.

2022-02-27
Previous Post: What is a no credit check loan?
Next Post: BTS’ V Shares Photos While Browsing Music Albums